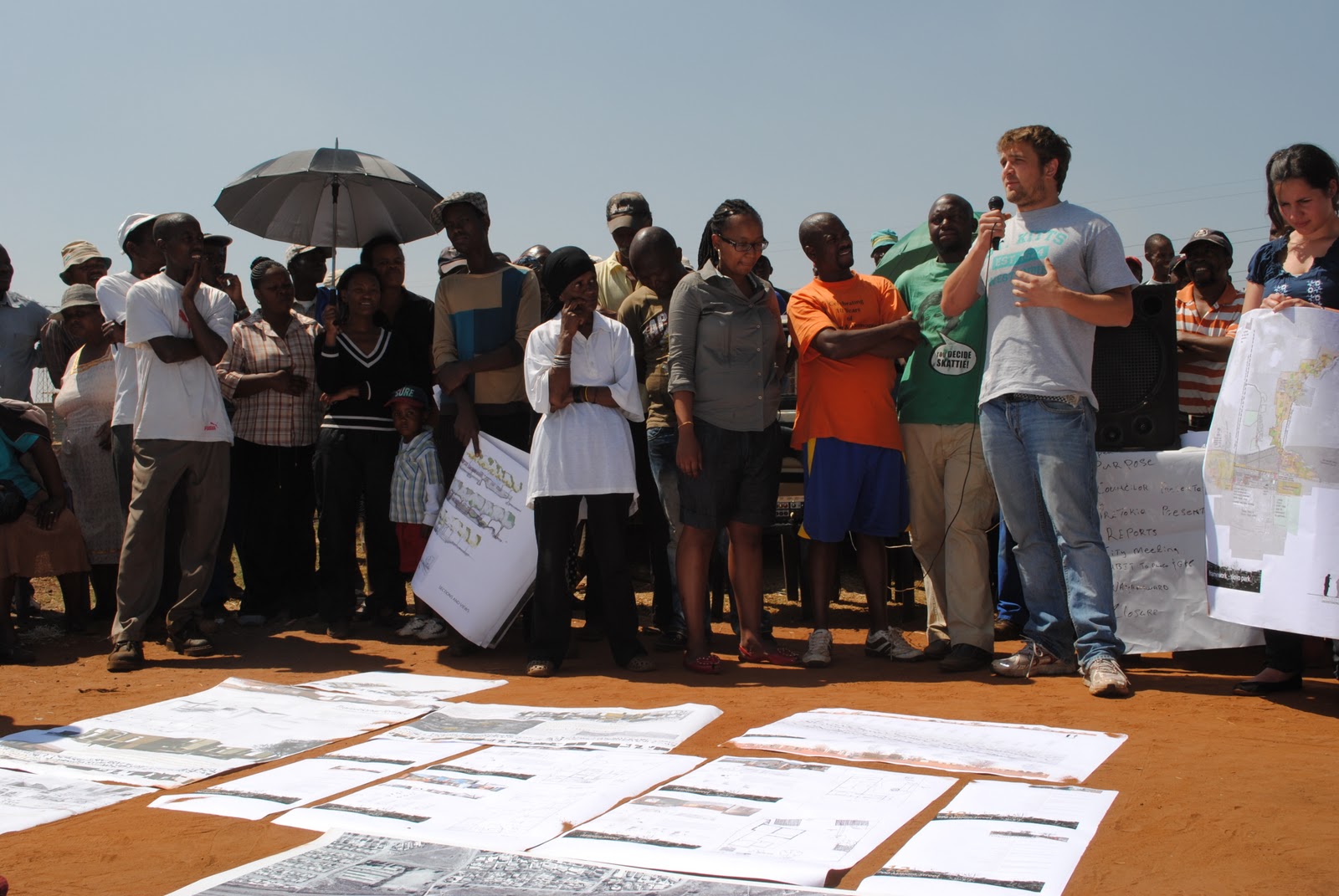 The final quarter at the University of Pretoria allows for the students to select one project undertaken in the year under: Housing and Urban Environments, Heritage & Cultural Landscapes and Environmental Potential.

The intention is for the student to take the proposal further into a design detailed level of resolution. This project then is detailed through to much more holistic architectural level. This quarter is also supplemented by an elective theory course in order to prepare the student for the Thesis Year ahead.

*
Elective
My choice was the Housing and Urban Environment  project, as I felt there was still much to do and learn in Slovo Park.
The initial research group remained the same with the inclusion of a new member who worked on a different site, but whose design was not site based.
The Plan
Our lecturer’s offered us that, due to the level of community interaction, we could build a part of our intervention. But we would have to fund, manage and build the design with the community over the next 6 weeks. This built product would then be assessed on site and would be our final mark.
Getting Started
The first task was to decide which project to go through with, as the other students in the class would take forward their individual designs done over 8 weeks in the previous semester, we as a group would take further a group design, as our individual proposed designs were much more ambitious than we could possibly build with little to no money and in the time frame we had.
Choosing a Site
After we presented our individual work to the community during one of their official meeting we understood that their was no formal meeting spaces and the informal spaces did not work very well. 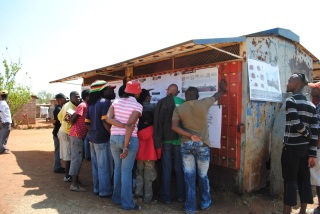 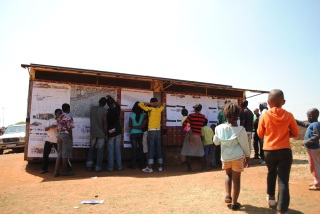 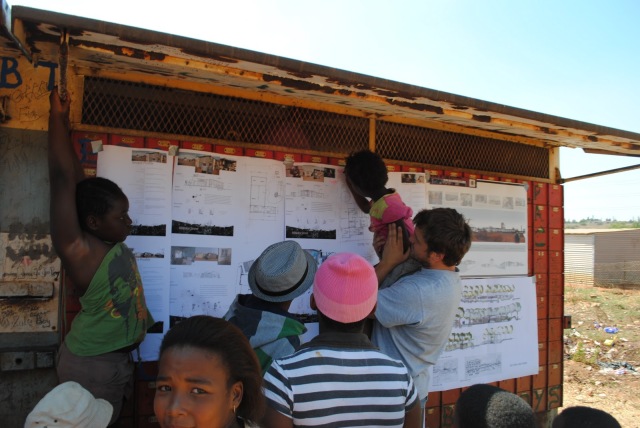 We chose a site, identified in Urban Analysis framework, as a key point at which the development of Slovo would take place by creating a platform for people to meet and discuss the future of their community.

(Bennett, Casson, Makgabutlane, Fillipe , Hattingh ; 2010)
*
The Project In Brief…
After being contacted by the community of Slovo Park the University of Pretoria with the community have been researching and designing an upgrading and development plan for the settlement over the last few months.

The research team, made up of the community and the students, have identified a small portion of their proposed design in the form of a Community Center that will be built over the next six weeks.

The team has to arrange the funding, build the project and manage the entire process. 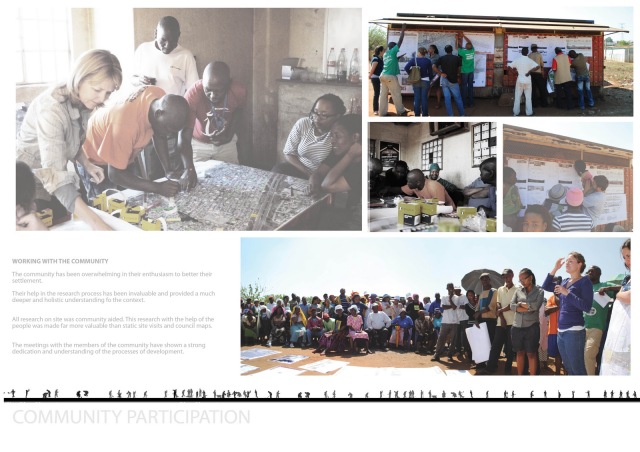 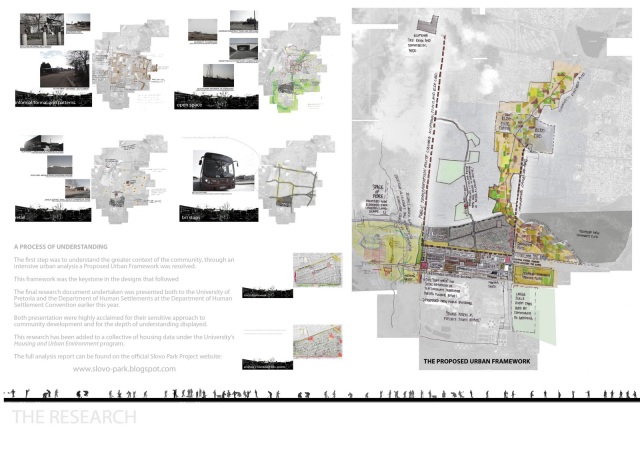 The Built Proposal
The design put together was infused with the principles learned during the individual proposals and seeks to provide the first step towards a much larger development.
This pilot intervention will lay the framework for the future development by uniting the community under a common goal and using that energy to project the project past our interaction with the community and make the design a true bottom up initiative.
Each built piece is intended to provide the necessary infrastructure for the community to use as its intended function now, without compromising its adaptability in future:

The design of the paving with the intentional space for future columns to build the ‘future blue print’ for the community
or
the low seating walls for the mobile clinic waiting area will become the foundation walls for the proposed clinic in the future phase e.t.c

Built Phase & Future Phase.
The Built Phase will be the re-refurbishment of the existing community structure over the 6 weeks, this will set up the construction sequence for a much larger project development which we designed with the community.

The Future Phase is designed on a much larger scale and  requires more infrastructure and time than we have, but is outlined by the Built Phase
Each phase is incrementally designed so at each point the design can be critically reviewed by the community themselves to ascertain the most effective path towards the built product.’

Current State
The Slovo Park Project Team have begun site works, and are constantly seeking more funding and donations.
Below is the current program for the community building team. 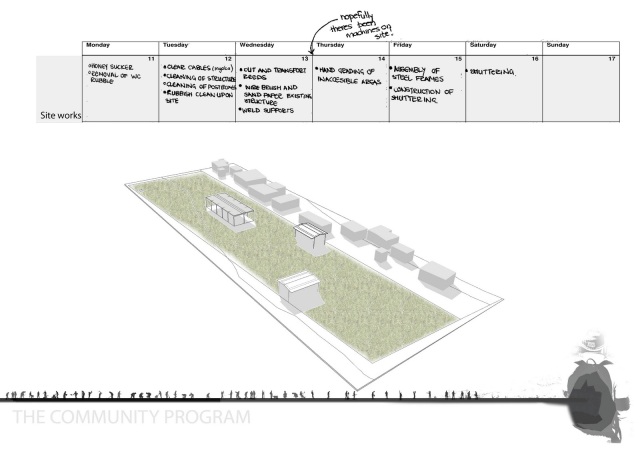 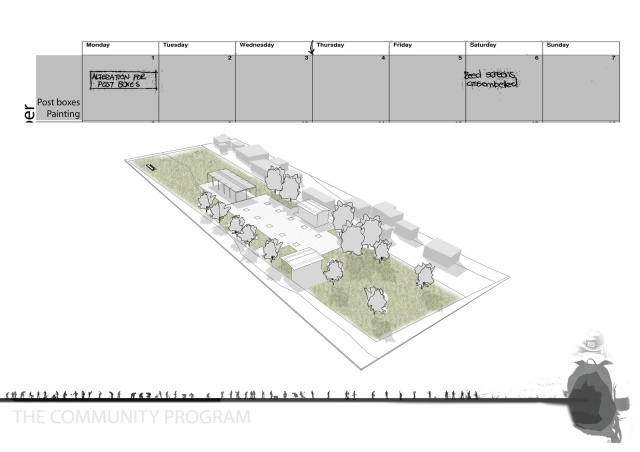 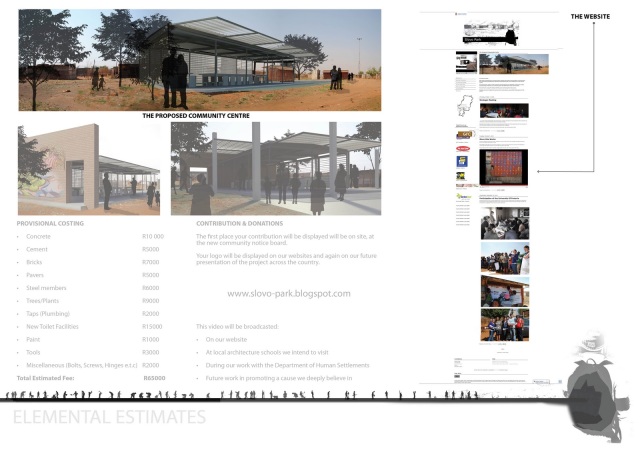 The Slovo Park Project team has received overwhelming support from the community and is busy with site works at the moment, and moving swiftly along the scheduled program.
© Jhono Bennett, 2010. Unauthorised use and/or duplication of this material without express and written permission from this blog’s author and/or owner is strictly prohibited. Excerpts and links may be used, provided that full and clear credit is given to Jhono Bennett and http://www.jhonobennett.com with appropriate and specific direction to the original content

© Jhono Bennett. Unauthorised use and/or duplication of this material without express and written permission from this blog’s author and/or owner is strictly prohibited. Excerpts and links may be used, provided that full and clear credit is given to Jhono Bennett and www.jhonobennett.com or www.jhonobennett.co.za with appropriate and specific direction to the original content