My first project at the University of Pretoria was the adaptive re-use of the existing Pretoria Art Museum within the context of Arcadia Park.


This was a particularly difficult project due to the unfathomably subjective possibilities of design approaches based on the notions of ‘Cultural Significance’. Anyone who has attempted a heritage project will understand the complexities involved in working through this process.


My first attempt at this project led me down quite a revealing path as this was my first project after working in an office for two years. I guess my initial need to prove myself as a designer and work using ‘office design logic’ could only produce what was originally presented.


But the re-worked presentation was quite a cathartic process to practice and implement what I’ve learnt at UP.

Statement of Significance:
Arcadia (the oldest suburb in Pretoria) is a cultural canvas of the change Pretoria experienced as a city
Arcadia Park is the community space that belongs to the people of Arcadia and South Africa
The Pretoria Art Museum is understated civic building needing to re-instated

Framework
The design calls for a consolidation of the historically significant buildings in the area along the existing public green spaces to establish historical green routes through Arcadia
These spaces would not only protect the pedestrian from the high traffic movements of the area but provide an environmental function of moving excess rainwater along a system of swales and recharging the ground water at these key green spaces.
Arcadia park being a key point in this movement of water as well as the center for Cultural Information of the greater network.
The Park
Arcadia park at the moment is functioning as a community space with locals using it as a space of relaxing, playing games and sports and a social meeting space. All these activities happen independently of the Art Museum and many locals when questioned didn’t know what the building was for.
The museum is so disconnected from the park that after further research a street children’s art center was discovered working entirely independent from the museum.

The new design establishes the existing activities while providing a formal center for the children’s art to take place.
The energies of the movement of people through the site is intended to work with the inclusion of a new layer to signify the coming together of the new and the old.

This layer is intended to provide the platform for the newest layer of the park to place, by providing a literal framework for local artists and community member to use to their own needs.
The idea of treating the edges of the park to facilitate these activities is applied to the museum itself with a removal of the podium it now sits on and construction of terraced seating around the structure.
This would hopefully encouraging a discourse between the new structure and the old playground that is placed between. 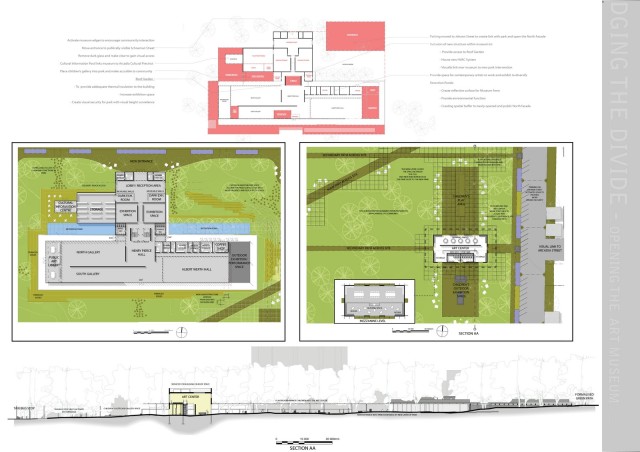 The Museum
The museum itself is intended to be left structurally sound with only the removal of the podium and the children’s art center. The art center will be replaced with the publicly accessible art center to the parks eastern edge.
The programming of space is adapted to facilitate the new entrance to north, providing a more visual facade to the public and encouraging movement through the museum to the park
This is intended to alleviate the criminal nature of this edge with passive surveillance and supplemented with the placement of the parking adjacent
© Jhono Bennett, 2010. Unauthorised use and/or duplication of this material without express and written permission from this blog’s author and/or owner is strictly prohibited. Excerpts and links may be used, provided that full and clear credit is given to Jhono Bennett and http://www.jhonobennett.com with appropriate and specific direction to the original content